Has The Man Bun Finally Been Dethroned By The Merm? That's The Man Perm

Ok man buns, we can take 'em or leave 'em but guys with curly hair? Mother may I! Word has it the man perm - or merm, for short - is the latest hairstyle to go viral and tbh, we wanna know what took so long. There's something unbelievably hot about those shabtastic man curls! We'd like to thank Jon Snow for having everything to do with this. Without further ado, we give you: guys that merm. 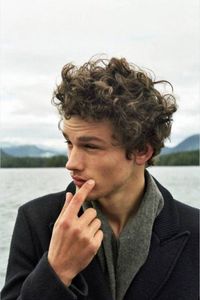 It is a big day for man hair news today because, brace yourselves... the man bun is no more. Sort of. It's still out there, doing its thing, bobbling about and blocking your view of the tube map, for now anyway but it's no longer number one bae. That's right, it's been dethroned by none other than the wonderful Merm or the man perm, if you want to be all verbose about it.

Apparently the number of dudes requesting a perm has drastically increased recently. And no, thankfully we're not seeing a resurgence of Justin Timberlake's ramen noodle locks. This time round it's shabby, rugged and a whole lot of I'm-too-busy-being-hipster-to-care.

Unlike it's high-bun nemesis, the Merm is low maintenance, pretty and yet masculine, so ya know, it's not like you'll be having a hair off or anything.

So, in homage to this new hair trend, it's only natural that we celebrate these curly hunks together, in a kind of hairy friend circle of trust. Needs must! Also, is it me or is Merm starting to sound like a totally LIT name?!

We give you the most Pinterest-worthy man perms of the land. Some of these could well be natural heavenly ringlets, unfortunately we weren't able to get close enough to tell. Enjoy!

You don't need a hipster beard to look pensive

Oh the ol' look at the floor trick, we can appreciate that

"I share my sea salt spray," he whispers tenderly

The hair, the eyes... We're blinded by boyfriend goals here.

The frown is working

The lob version of the Merm

Short back and sides but the quiff stays bro

This guy for president!

16 Reasons Why Men With Chest Hair Are Superior Beings

​The Top Hairstyles For Summer 2016, As Told By Pinterest