From 19 To 29: Adele's Amazing Beauty Evolution

Last night Adele won her, like, millionth Grammy and, as usual, she looked gorgeous whilst doing so. Only Adele could convey such grace whilst simultaneously yelling that she "f*cking adore[s]" Beyonce in her cockney twang. As her words and her mani proves, you can take the girl out of London but you can't take London outta the girl. But whilst her penchant for killer nails has remained, her beauty evolution has come on leaps and bounds since we first saw her in 2008...

When we first met Adele Adkins in 2008, she was a simple London girl with melancholy songs and a six-string guitar. Not much has changed, really - she's dropped the guitar, but her songs remain deliciously sorrowful. As far as her look goes, Adele knows her body and what style suits her best - retro dresses teamed with dramatic eyeliner. In 2012, she changed from her natural reddish hair to blonde bombshell, but this new 'do doesn't mean she was ready to give up on her winged liner and glamorous style.

The best thing about Adele is she doesn't prescribe to the formula that 'sex sells' as many other artists do. She keeps her performance about her voice and the message. But, that doesn't mean we don't swoon over her look on a regular basis. Let's face it - we all want to master that Adele cat eye. But that's a sign of how major her transformation really is - back in 2008, Adele quite often didn't even wear makeup, and when she did, it was more liberally applied. Her beauty evolution is one we all dream of: One that is constantly changing and always improving. Check out her evolution below. 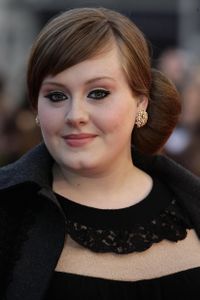 What do you make of Adele's beauty evolution over the years? Let us know! @sofeminineUK

From Jo To Joanne: The Many Faces Of Lady Gaga

Victoria Beckham's Style Through The Years: Her Wardrobe Evolution