The Best Beauty Trends Of 2016

by Pascale Day Published on 30 December 2016 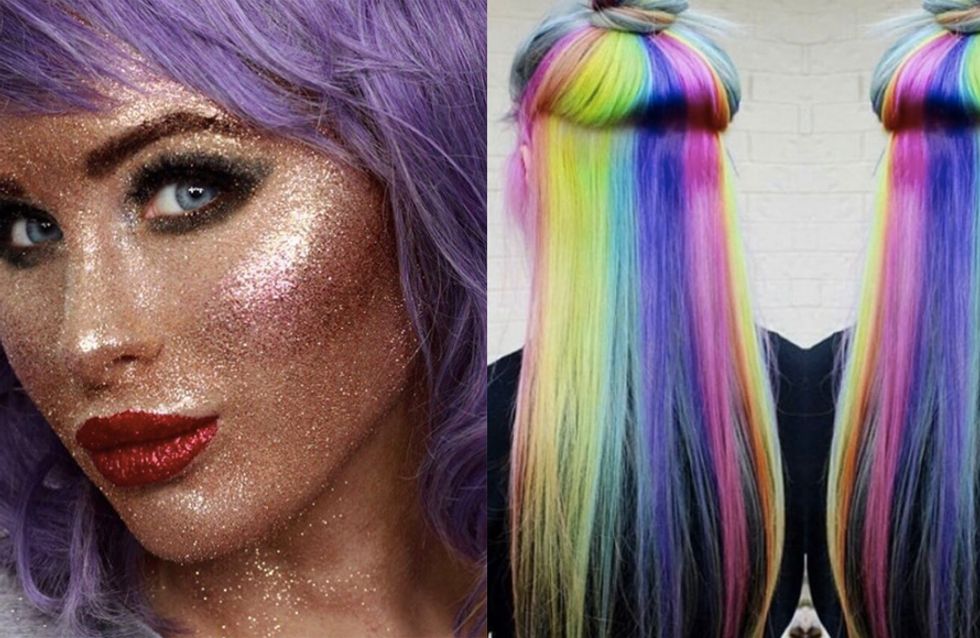 So another year comes to a close and while the majority of 2016 has been mostly doom and gloom, the make-up world has enjoyed somewhat of a revolution and we're totally on board with it. So what have been the best beauty trends of 2016? We take a look below.

If there was any indication we needed that we were living in the 80s vision of the future, holographic makeup was it. This trend saw us hologramming our nails which, we'll admit, looked pretty awesome. So why stop there? We then started moving the trend up to our faces, finishing the year with holographic lip gloss that mesmerised people so much that we're pretty sure no one was listening to anything we were saying and left them making a mental note to put some money from their next payslip aside for a gloss of their own.

We can no longer deny it: We are all obsessed with glitter. Our fixation with the sparkly stuff peaked in 2016, with glitter hair, glitter beards (for our boyfs, obvs), glitter lips, glitter eyes, glitter nails. And the whole thing came full circle this December, when makeup artist Katie Butt covered her entire face which glitter. Which looked cool, but also kind of mental. We're not sure where the glitter trend will go in 2017 - perhaps full body a la Edward Cullen - but we're looking forward to finding out.

We all like a shake up every once in a while when it comes to our hair. But while some of us go a little darker or a touch lighter, others are waaay braver. Yes, rainbow hair was the jaw-dropping trend that we were all jealous of this year. Rainbow hair made our barnets look as though they'd been dipped in molten candy, and someone even went as far as to make their hair glow in the dark - which can't be good for your tresses but damn does it look cool.

I can't sleep at night because it's too bright 🔥 @hairbesties_ Have you seen the Phoenix Neon Glowing Hair video on my YouTube channel? Link on my bio #Neonmania #NeonHairBattle @kenraprofessional @arianasin @angelicasalek

Ever since we saw CoverGirl's James Charles taking a ring light to his prom to show off his highlighter, we've been obsessed with the stuff. Look up highlighter on Instagram, and you'll be presented with a lifetime's worth of Instaporn all revolving around the shimmering powder that's set on your cheekbones. Rainbow glow, gold glow, liquid glow - you name it, it's stunned on someone's face. There's no way that this trend is budging in 2017, so stock up over Christmas will ya?

In 2016, we discovered how versatile our brows are. And the great thing it, there's a shape that suits everyone. From thick brows to feathered brows to straight brows, there's a look for each of us - and a YouTube tutorial on how to get it.

What's your favourite beauty trend of 2016? Let us know! @sofeminineUK

Unicorn Eyeliner is The Saviour 2016 Needs

At age 26
by the editorial team