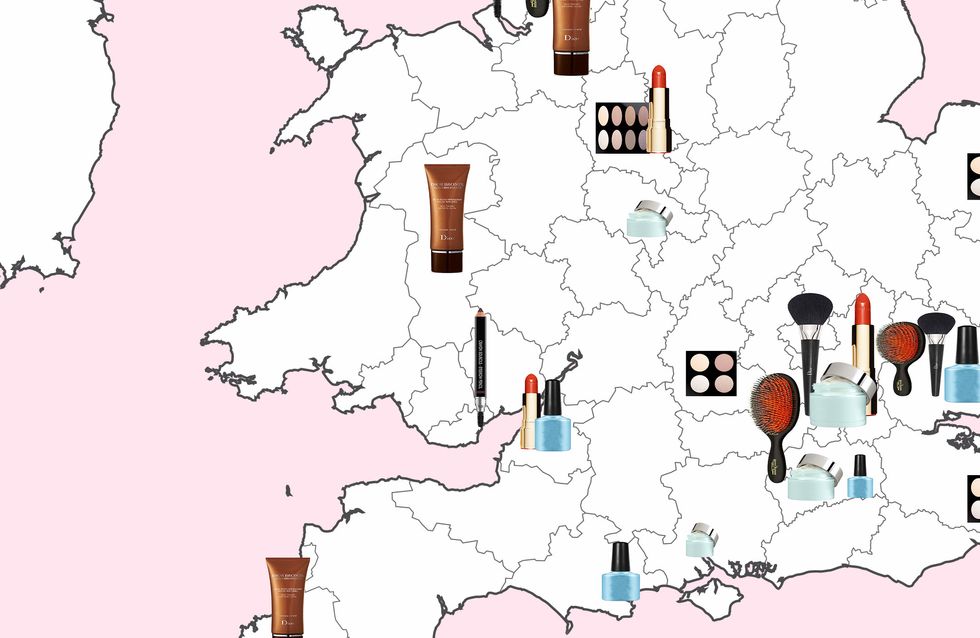 Ever think you spend way too much of your salary on make up? Yup, me too. And don't you not sleep easy until you've got yourself on a particular type of product, too - whether that be the latest Mac lipstick or Charlotte Tilbury's miracle-working foundation? You're not going crazy. And here's the proof. We've got the stats on the most popular cosmetic product in every area of the UK and the results may surprise you...

The end of 2016 is almost upon us and that calls for celebration and reflection. Reflecting on the good, the bad and in this case, the beautiful. In what's probably the least shocking thing you've heard all year (too many celebrity deaths, Trump getting elected etc.) - we've spent A LOT on beauty.

​From mascara and blusher, to hair serum and fake tan, we sure are a nation that LOVES our beauty. And proud of it too. But what do the stats say?

If you've ever wondered how your region measures up compared to the rest of our nation, online retailer Escentual.com have done all the hard work for us. They've compiled a beauty map of the UK which compared sales of all the different beauty booty across the country.

Here's how it looks:

In more not-shocking-at-all news, Geordie women simply can't get enough of the brown stuff and are the biggest shoppers of fake tan, according to Escentual.com.

Meanwhile, slightly further south it seems Liverpudlian lasses are big fans of beautiful brows as they've spent the most on eyebrow grooming collectively over the past 12 months. They've also led the way in the haircare stakes as they've invested just as much as perfecting their bouffants.

With the amount of skin damaging pollution in the capital, it's no wonder Londoners' biggest expense is skin-care products, presumably to counteract the effects of living in the city. As well as stocking up on pollution-combating buys, they're also partial to a lipstick or two as they've spent the most on plumping their pouts.

Elsewhere, Yorkshire women spend the most on partying up their peepers with eye-shadow, while Edinburgh ladies are the biggest lovers of skin stapes such as foundations and blusher.

Essex is the home of nail varnish. Beauty stereotypes are nothing new but the county's glam pack have defied that stereotype by splashing out the most money on polishing their talons and not spray tans as the TOWIE cast lead us to believe.

Emma Leslie of Escentual.com said: “There are some big regional differences in certain products and favourite must-have purchases and hero products can really take hold in certain areas. Newcastle has been a big stronghold for self-tan for a few years now, and that’s getting stronger if anything. There’s been a few times this year that we’ve had self-tanner products sell out on a Friday because there’s been a massive set of orders for next day delivery for the North-east, clearly in preparation for a big Saturday night out.''

"​Liverpool also has been big for eyebrow products for some time and that has continued in the past 12 months, although Manchester is close to catching up. There have been some big shifts also this year, Yorkshire and Leeds have recently become top sales in eye shadow, and Edinburgh are phenomenally big spenders in foundations, BB creams and blushers and both of those have happened in the past 12 months.”

BRB, off to spend more money on make up in preparation for NYE, who's with me?

What's your favourite make up staple? Let us know @SoFeminineUK

Stop Everything! Our Dream Lipsticks Have Just Dropped And They're The Prettiest Things We've Seen